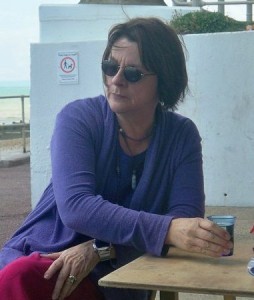 I was one of those funny kids who escaped into stories and, at the age of seven, had the whole class passing me tissues when I wouldn’t stop crying over a book in which a bear died. At the age of nine, a kind teacher called Mr. Eastgate wrote ‘For a Wonderful Writer of English from Wales’ on my bookmark. I’d moved from Wales to Nottinghamshire at seven, but my early years had been steeped in stories, myths and poems.

Doing a BA in English Language and Literature didn’t help me to be creative myself as I simply marvelled at the skill of others. Teaching the language for 25 years and studying for an MA drove further nails into the coffin of my desire to write.

Then, when I was working in Abu Dhabi, an email arrived: an invitation to join a small writers’ group. I was one of the few who went along, and it changed my life. I started to write again, and it was fun. Back to Hastings in 2009, I bumped into someone I hadn’t seen for over ten years, and he persuaded me to go along to Hastings Writers’ Group, where I was struck by the friendly, supportive atmosphere. I was Membership Secretary for just over a year and thoroughly enjoyed it and now I’m back as Membership Officer.

I confess to being a lazy, sporadic writer with no ambition to be published, but I love the process of writing and the fact that there are stories, plays and poems lurking somewhere in the recesses of my mind, which sometimes show themselves and pop on to the page. I particularly like writing short stories but feel I should work harder on plays.

I’ve taken a few courses, won a few competitions and been published in a few anthologies. It’s time to do some proper writing, and this could very well be the year I make the effort!