I was born in the East End of London in 1943. I went to Pretoria Secondary Modern School, an all-girls school, where I had a very basic education, not excelling in anything very much. On the whole, the teachers were uninspiring and I shed no tears when I left. I did, however, have one teacher who I admired greatly and she taught my favourite subject, English.
At fifteen, I left school to go out into the real world where I had to earn a living. I had been given very little preparation for the enormous change in my life and was not aware that I had real choices. In those days it was important that we brought a wage home so I started work in an office. This was to be the first of many jobs for me and over the next forty five years I tried my hand at everything from office work, assembly work in factories and later on to a nursing home. I married my life partner and we had two children. At this point I decided to try my hand at nursing and spent the next twenty-three years working in operating theatres as an auxiliary nurse. This was an extremely demanding time but I spent any free time I had writing poetry and short stories. To my delight, I was able to sell some of these to magazines, together with letters and photographs. 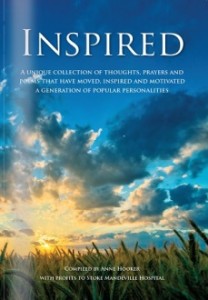 In 1981, I started to compile a book. I wrote to several personalities who were celebrities in their own right. I asked them what inspired them and started to record their replies. With contributions from Lord Laurence Olivier, Baroness Thatcher, Sir Alec Guinness, The Two Ronnies and many more, I had a lovely collection.
The research for this was all done without the help of computers, simply using the library, or daily newspapers. After being accepted by two publishers and then rejected by them, I lost heart and eventually condemned it to the back of the loft.
In June 2008, my husband died. During the months and years that followed I decided to take stock of my life and while sorting out my emotions, I cleared out rooms, cupboards, old negative thoughts, and eventually, the loft. I became reacquainted with my book and realised I had wasted all this effort. With the help of my good friend, Rosemary Bartholomew, we self-published it under the title, Inspired, and donated all the profits to Stoke Mandeville Hospital Spinal Injuries Centre. To our delight, it raised £1000.
I have since self-published a second book I Can’t Explain It But… which has raised £200 for St. Michaels Hospice.
If an uneducated old biddy like me can do it, you can too. 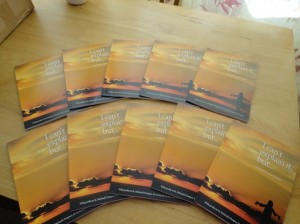